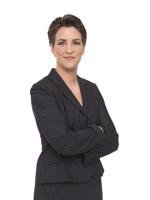 Maddow’s popularity is on the rise. Since her eponymous nightly show debuted in 2008, she pulls in nearly 1 million viewers nightly. “It’s hard for me to know why someone watches me,” she says, noting that her bosses’ specifically asked her “not to be like everything else on TV. They really encouraged me to be quirky and opinionated. I don’t fit in.” She’s the only openly gay television anchor, but says doesn’t use her show as a platform to advocate for gay rights or other social causes. “My influence extends only as far between me and the camera. I’m not trying to change things, I’m trying to cover them.”