KANSAS CITY, Mo. – Debbie Higgins McCall saw herself mentioned in the press for the first time last month. She was surprised, frankly, that it took so long.

She is, after all, Dr. Phil’s first wife, the ex-cheerleader he married Nov. 27, 1970, at Southridge Presbyterian Church in Roeland Park, Kan.

That’s Phillip C. McGraw, the TV psychologist Oprah made famous. The “get real” guru whose “Dr. Phil” show is considered the most successful new daytime series in a decade, serving up insta-consults to quarreling siblings and boyfriends with roving eyes.

McCall, who manages a liquor store in the Kansas City suburbs, sometimes calls herself the “secret first wife of Dr. Phil.”

She had never spoken publicly about their four-year marriage, which she claims failed because he had a roving eye. In recent years, friends advised her to “call Oprah.” But, she said, she wasn’t emotionally prepared to go public.

McGraw mentioned the failed marriage in a recent Newsweek cover story: “I was the big football player, and she was the cheerleader. This was just the next thing to do.” It just didn’t work out, he said.

McGraw has not given interviews since the show began last month, his publicity staff said last week.

In previous interviews and his own books, he has mentioned his Kansas City connection only in passing.

In fact, McGraw spent his formative teen years here, playing football and being just one of the guys in the Class of ’68 at Shawnee Mission North High School and working part time at Hallmark Cards Inc.

When his classmates tell people they went to high school with Dr. Phil – and they do so proudly – people often don’t believe them.

In his first book, “Life Strategies,” McGraw wrote that when he was a teenager, he moved here with his father, who was on an internship in psychology. McCall remembers that McGraw did not want to be here.

“Daddy made him come up here because he wanted to keep an eye on him,” she said.

Classmates remember that the McGraws at one time lived in an apartment complex next to the school. McCall said they eventually moved into a split-level house not far from where she grew up on Buena Vista Drive in Roeland Park. In the school’s alumni directory, he’s still listed at that address.

At North he was known mostly for two things: being a jock and being Debbie Higgins’ boyfriend, according to classmates. 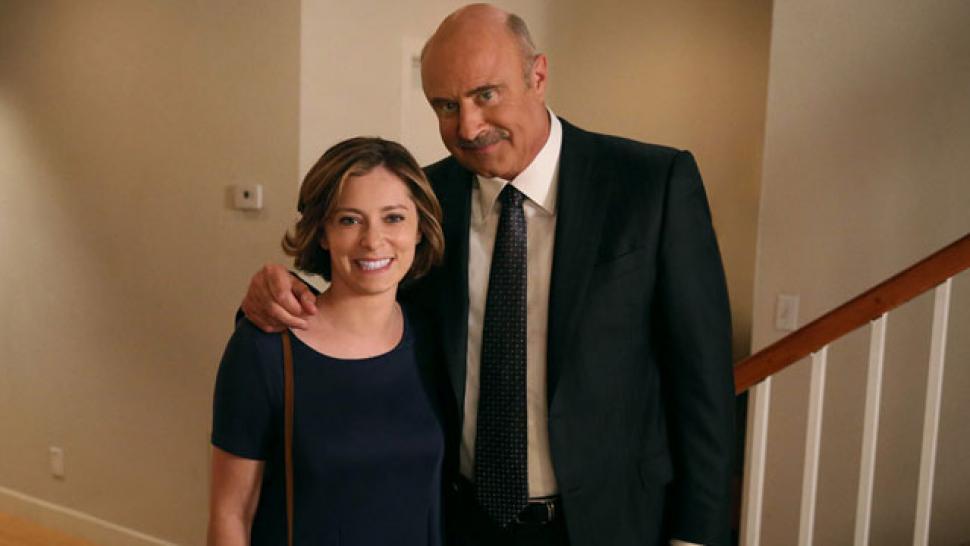 She was the cute, vivacious head cheerleader and homecoming queen with the million-dollar smile. He was the newcomer who spoke with a cowboy drawl from Oklahoma; some of the kids made fun of him for sounding like a hick.

One classmate described him as the strong, silent type, literally standing head and very broad shoulders above his classmates. At 6 feet 4 inches, he towered, too, over his 5-foot-2-inch cheerleader girlfriend.

“He had a physical presence that you wouldn’t miss,” said Charlie Chamblin, a digital printing salesman in Overland Park who knew the couple in high school. “He was not arrogant, he was not cocky. He was just a regular guy.”

In an interview with a student reporter at North last year, McGraw said he was not a highly motivated student.

“I did not distinguish myself academically,” he said.

Janet Warman of Bonner Springs, Kan., a cheerleader with McCall, was surprised when she saw McGraw’s career as a TV psychologist take off “just because he didn’t talk a lot,” in school.

“He wasn’t the one that had his hand up all the time,” said Warman, a registered nurse at Providence Medical Center. “He seemed to be a very smart guy, but that was just a perception, not because I knew it for a fact. You just got the impression that he was smart. He really kept to himself.”

McGraw is remembered fondly by his coach and the guys who played football with him. He played all three years, recalled Larry Taylor of Overland Park, Kan., former head football coach and teacher at North.

McGraw was a tackle his senior year on a varsity team that finished 9-0, the best in Kansas in 1967.

Ed Dallam was the quarterback of that team.

“(McGraw) was really an outstanding member of that team, high-quality, hard-worker type of player,” said Dallam, now a dentist in Kansas City. “I think he was singularly focused. I think he saw, obviously, furthering his educational pursuit was going to do things for his life and make his life better, easier, more fun. And that sports was a vehicle for him pursuing that. I think that was a major motivating factor for him.”