Melania Trump says she has “much more important things to think about” than rumors that President Donald Trump cheated on her.

When asked if she loved her husband, she replied, “Yes, we are fine. Yes.”

ABC interviewed Trump during her visit to Africa last week, which will air in full Friday night. In a new clip aired on “Good Morning America” Friday morning, Trump said that she is a “mother and a first lady” and that those who speculate about her marriage are spreading gossip.

“I’m a mother and a first lady, and I have much more important things to think about and to do,” she tells @ABC. https://abcn.ws/2PtaBC4

She played down a suggestion the repeated rumors of his philandering had put a strain on their marriage.

“It is not concern and focus of mine,” she said. “I’m a mother and a first lady, and I have much more important things to think about and to do.”

But when she was asked if the repeated rumors had hurt her, she paused. Then she reiterated the “media world is speculating.”

“Yeah, it’s not always pleasant, of course,” she said. “But I know what is right and what is wrong and what is true and not true.”

A handful of clips have already been teased on “Good Morning America” this week, covering Trump’s thoughts on #MeToo (“I do stand with women, but we need to show the evidence”) and how her personal life has influenced her Be Best anti-bullying campaign (“I could say I’m the most bullied person in the world”).

Trump added that she was disappointed organizations declined to partner with her.

“It’s sad to see that organizations and foundations I want to partner with choose not to because of the .. administration,” she said, “and I feel they are choosing the politics over helping others.”

.@FLOTUS tells @TomLlamasABC in exclusive interview that she believes she is “one of the most bullied people in the world” – and it motivated her to take on cyberbullying. https://gma.abc/2CFSSo8 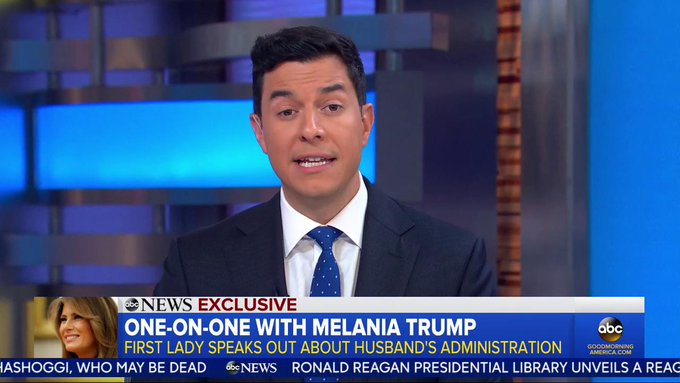