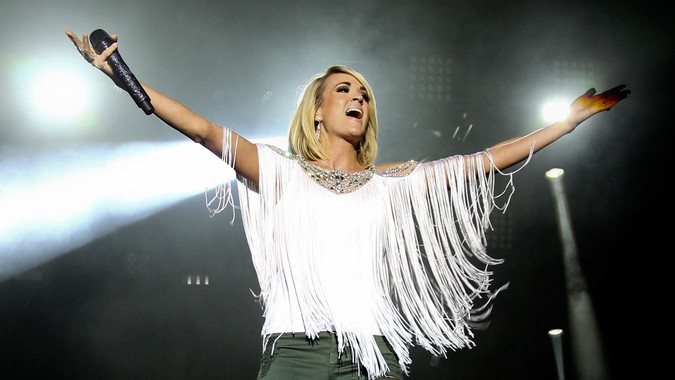 Country-pop superstar Carrie Underwood got her start on the “American Idol” stage, winning the show in 2005. She’s since gone on to release eight albums, become a bestselling author and found several wellness companies. Underwood’s success on and off the stage has brought her net worth to $140 million, according to Celebrity Net Worth.

Here’s a quick look at the singer’s stats:

Competing on — and winning — “American Idol” was just the tip of the iceberg for Underwood’s success as a singer. She has released eight albums, plus a greatest hits album, and has sold more than 64 million records worldwide, according to her official bio. Eight of her albums have landed on the top five on the Billboard Hot 200 chart, with four of those albums — “Carnival Ride,” “Play On,” “Blown Away” and “Cry Pretty” — reaching the No. 1 spot. In addition, she’s had 40 singles rank on the Billboard Hot 100 chart.

Her singing hasn’t just brought her acclaim — it’s also added big bucks to her net worth. In addition to earnings from album sales, Underwood makes millions from her tours. In 2013, Underwood made the Forbes Celebrity 100 list thanks to her over 100 tour dates during the scoring period, helping her to net $31 million for the year.

Underwood published her first book, “Find Your Path: Honor Your Body, Fuel Your Soul, and Get Strong with the Fit52 Life,” in March 2020. The book became a New York Times bestseller, and also reached No. 1 on Amazon and Publisher’s Weekly’s Bestseller lists, according to her official bio.

Underwood has also launched her own fitness app, fit52, and is the founder and lead designer for the athletic apparel brand CALIA by Carrie Underwood.