The USA have completed a historic Presidents Cup triumph over the Internationals at Royal Melbourne. Led by inspirational playing captain Tiger Woods, the US turned a 10-8 overnight deficit into cup glory after dominating Sunday’s singles session.

Wins for Woods, Dustin Johnson, Patrick Cantlay, Xander Schauffele and the maligned Patrick Reed, two halved matches plus a guaranteed half point for Matt Kuchar were enough to secure the star-studded Americans a 16-14 victory.

“It was an honour for me as a player and even more of an honour to be their captain,” Woods said. “It’s been one of the more amazing challenges but all the guys, they believed in one another. We relied on one another as a team and we did it together.

“I trust all my 11 guys. I trust them implicitly; I told them from the very get go. They went out there and got the points we needed. This cup wasn’t going to be given to us. We had to go earn it, and we did.”

Woods sparked the US fightback when he downed the Internationals’ previously unbeaten spearhead Abraham Ancer three-and-two in the opening singles match. In doing so, the 15-times major champion became the most prolific winner in Presidents Cup history, surpassing countryman and career-long rival Phil Mickelson’s 26 victories in the matchplay competition.

Johnson was never threatened in a four-and-three victory over Cup rookie Haotong Li that locked the scores up at 10-all. Defeat for Li earned the Chinese youngster a dubious place in the history books as the only International player not to contribute even half a point at the 2019 edition.

After losing his previous three matches in a horror week, Reed gave the US the lead for the first time since Thursday morning with his four-and-two success against CT Pan. In a cruel blow for the Internationals, Hideki Matsuyama then blew a four-up lead to square with Tony Finau.

Sungjae Im restored hope for the underdogs with a four-and-three win over US Open champion Gary Woodland that locked the scores up at 11.5 points apiece before Adam Hadwin scrambled to square his match with Bryson DeChambeau.

But a three-and-two win for Cantlay over Joaquin Niemann, a two-and-one victory for Shauffele over Adam Scott (Internationals) and Webb Simpson’s two-and-one defeat of Byeong Hun An gave the Americans an insurmountable three-point buffer.

Not even Cameron Smith’s stirring two-and-one comeback victory over the previously undefeated Justin Thomas could save the Internationals from another beating after Kuchar sealed the deal. Hometown star Marc Leishman tied Rickie Fowler in the last match.

Finau credited 43-year-old Woods, the USA’s oldest player who completed one of sport’s greatest comebacks this year to win the Masters, for the Houdini act.

“I was four down with eight to go and I basically told myself, ‘I can’t give up on my teammates, my guys, my captain’,” Finau said.

“Tiger, the story of his resilience, coming back from what he has with injuries and everything that he’s been through, I think each of us, we just believe in each other because we know we could do what we did today, and we really believed that we could win the cup. We were kind of against the odds, but we are very inspired to play for Tiger, with Tiger, and it’s so satisfying to win this cup because of that.”

Tiger Woods accused the Royal Melbourne crowd of going “over the top” after a wild third day at the Presidents Cup.

The Internationals headed into Sunday’s singles with a 10-8 advantage over Woods’ United States team, but the day was notable for a crowd disturbance that led to Patrick Reed’s caddie being suspended for the rest of the event.

Kessler Karain was involved in an altercation with a fan after Reed and his partner Webb Simpson lost to Hideki Matsuyama and C.T. Pan in the morning four-balls.

Karain admitted he had “had enough” of the hostility shown towards Reed, who has played the role of pantomime villain this week after arriving in Australia on the back of accusations of cheating during the Hero World Challenge.

The caddie told Fore Play: “Riding on the cart, a guy was about three feet from Patrick and said, ‘you f—ing suck.’ I got off the cart and shoved him, said a couple things, probably a few expletives.

“Security came and I got back in the cart and left. I don’t think there’s one caddie I know that could blame me.”

Woods, who went out first on Sunday before taking over his captaincy duties, felt alcohol had played a part in the incident and asked for a more respectful approach on the final day.

Asked how the atmosphere compared to a Ryder Cup, the U.S. captain said: “Well, I think it’s different. There aren’t as many people at this venue because it’s so small, a lot of bottlenecks.

“There’s obviously some yelling. There’s people who have had a lot to drink and have gone over the top.

“I’ve heard it. I’ve been in the groups playing when it has happened, and I’ve been inside the ropes as a captain witnessing it.

“Bipartisanship is part of playing in team matches, whether you’re home or on the road, it’s part of the deal. As long as the fans are respectful, all we ask is for them to be respectful.

“Hopefully they will be excited [about] Sunday and the matches and be very respectful of all the players.”

Woods’ Internationals counterpart, Ernie Els, felt the galleries were “pretty quiet” compared to New York in 2017 and that the Americans should “take it and move on.”

The South African said: “I’ve played in many Presidents Cups. I’ve played in the U.S. many times. If you look back at New York and how these players were treated in New York, this crowd is pretty quiet.

“I mean, we just get treated the same wherever you go as an away game, there’s some heckling going on and we all know that, and you prepare for that, and that’s just the way it goes.

“We shut up and we get on with things. That’s what we did in New York. So it’s part of the game.

“And I’m with Tiger; I’m against heckling. I’m against crowds being disrespectful to the players, but it happens. We as professionals, we move on.

“I think Tiger is one of the ultimate professionals that’s ever played the game. I’ve played with him where he’s been heckled in U.S. Opens and a lot of other places. He’s taken it on the chin and he’s moved forward. He’s been an example.

“Same has happened to me. It’s happened to a lot of players. But I must say, this Aussie crowd, OK, they got a little bit boisterous this afternoon with a couple of beers, but which crowd doesn’t? You take it and you move on.”

MELBOURNE, AUSTRALIA – DECEMBER 12: Playing Captain Tiger Woods of the United States team celebrates after chipping in on the fifth hole during Thursday four-ball matches on day one of the 2019 Presidents Cup at Royal Melbourne Golf Course on December 12, 2019 in Melbourne, Australia. (Photo by Quinn Rooney/Getty Images)

Tiger Woods is off to a great start at the Presidents Cup in Australia today. The captain of the United States team is playing in the first group, paired with Justin Thomas.

It didn’t take very long for the first “Tiger Moment” to happen.

Woods chipped in at the par three No. 5 hole.

“Go get that!!” Woods exclaimed to Thomas. 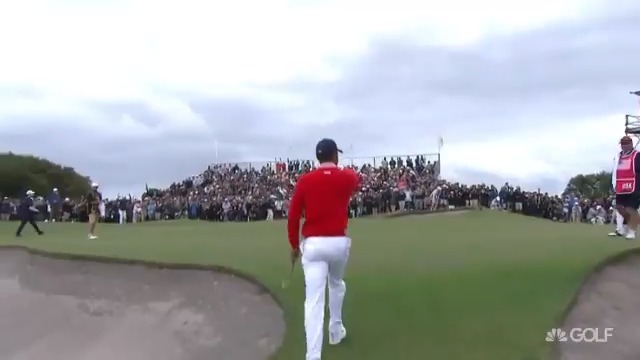 Woods and Thomas are leading the match, up two holes through six.